This resource provides an overview of temporary public interest determinations (TPIDs) made under section 37 of the Privacy and Data Protection Act 2014 (Vic) (PDP Act) and the process of making an application to the Office of the Victorian Information Commissioner (OVIC).

What is a temporary public interest determination?

A TPID is a written determination made by the Information Commissioner (the Commissioner) permitting one or more Victorian public sector organisations to engage in acts or practices that may otherwise breach the Information Privacy Principles (IPPs) or an approved code of practice.

A TPID can only be made in urgent circumstances where the public interest in an organisation doing an act or engaging in a practice substantially outweighs the public interest in complying with specified IPPs, except in relation to IPP 4 – Data Security or IPP 6 – Access and Correction, or an approved code of practice.

A TPID can operate for no longer than 12 months.

A TPID can only be made where the “circumstances require that a determination be made urgently”.1 An urgent circumstance can be defined as one that is “pressing; compelling or requiring immediate action or attention; imperative”.2

Noting this definition, whether a matter is considered urgent or not will depend on the particular circumstances and surrounding context of the matter.

There is no definition of ‘public interest’. Deciding what is in the public interest involves a case-by-case consideration of the relevant context and circumstances.

‘Substantially outweighs’ does not have a precise definition, however as it is used in a weighing exercise, the word ‘substantially’ should be interpreted as meaning ‘large, weighty or big’4 relative to the competing interest under consideration. There is no fixed standard of comparison.5

What is the difference between a TPID and PID?

TPIDs and public interest determinations (PIDs) are closely related mechanisms. The key differences between TPIDs and PIDs are:

What is the application process? 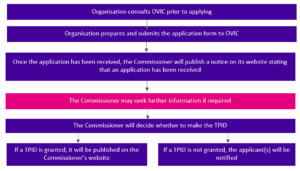 Who can apply for a temporary public interest determination?

One or more organisations subject to Part 3 of the PDP Act may apply to the Commissioner for a TPID. This includes all public sector agencies, councils, and statutory authorities.6

OVIC acknowledges that in urgent circumstances organisations may not have time to consult with OVIC before submitting an application.

However, where circumstances permit, organisations are encouraged to consult with OVIC before applying for a TPID. This will enable OVIC to consider whether a TPID is necessary, or whether some alternative act or practice could be pursued to avoid breaching an IPP or approved code of practice.

Contact OVIC via email at: policyteam@ovic.vic.gov.au to arrange a meeting and discuss potential options.

Organisations must complete the application form available in the sidebar and submit it to OVIC via email at: policyteam@ovic.vic.gov.au.

If relevant, a request should also be accompanied by supporting documentation. This may include a copy of any legal advice received on the matter, a privacy impact assessment and policy documents. The Commissioner may request other supporting materials to accompany the application as they see fit.

The Commissioner may make a TPID if satisfied that:

In deciding whether to make a TPID, the Commissioner must have regard only to the following factors:9

A TPID must include a statement of reasons for making the determination.10

Where a TPID is made, it must be published on the Commissioner’s website and remain there until:11

It is important to note that both PIDs and TPIDs may be disallowed by either House of Parliament.

Once a determination has been made by the Commissioner, it must be sent to the Scrutiny of Acts and Regulations Committee and tabled before both Houses of Parliament for review. This allows Parliament appropriate oversight of the Commissioner’s power to make PIDs and TPIDs, which modify the operation of Victorian legislation.

A complaint cannot be made about an act or practice that is undertaken in accordance with a TPID.13

Can a TPID be revoked?

The Commissioner must revoke a TPID if satisfied that:14

Before revoking a TPID, the Commissioner must give the organisation written notice of the intention to revoke, with reasons, and allow the organisation an opportunity to make a submission outlining why the TPID should not be revoked. The submission must be considered within any period stated in the notice before effecting a revocation.15 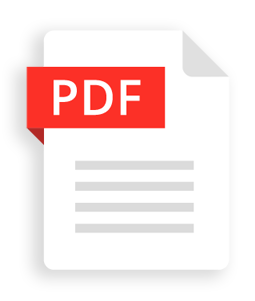