This resource provides an overview of information usage arrangements (IUAs), under Part 3, Division 6 of the Privacy and Data Protection Act 2014 (PDP Act), and the process of applying to the Office of the Victorian Information Commissioner (OVIC).

What is an information usage arrangement?

An IUA is a written arrangement approved by the Information Commissioner (the Commissioner) setting out acts or practices for handling personal information in relation to one or more public purposes that:

An IUA can be useful where an organisation or organisations want to collect, use, or disclose personal information (for example, information sharing between a broad range of organisations) for a public purpose that is not currently permitted by law.

For the Commissioner to approve an IUA, there must be a substantial public interest in handling personal information for the identified public purpose.

What is the meaning of ‘information handling provision’?

An ‘information handling provision’ is defined in the PDP Act as a provision of an Act that permits the handling of personal information:

What is the meaning of ‘public purpose’?

An IUA can only be utilised in the context of an act or practice that is for a public purpose. A ‘public purpose’ is defined broadly to mean:

This means that any proposed IUA should be grounded as being necessary to achieve one of the public purposes as described above.

There is no definition of ‘public interest’. Deciding what is in the public interest involves a case-by-case consideration of the relevant context and circumstances.

The weighing of opposing public interests varies depending on whether an IUA is sought in respect to an IPP, approved code of practice or an information handling provision.

‘Substantially outweighs’ does not have a precise definition, however as it is used in a weighing exercise, the word ‘substantially’ should be interpreted as meaning ‘large, weighty or big’6 relative to the competing interest under consideration. There is no fixed standard of comparison.7

What is the approval process? 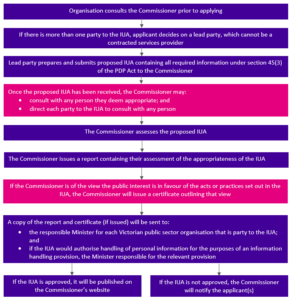 Who can apply for an IUA?

IUAs can consist of either a single party or multiple parties and the proposed IUA must be submitted by the ‘lead party’.8

What is the meaning of ‘lead party’?

Under section 43 of the PDP Act, the ‘lead party’ in relation to an IUA means:

Other parties to an IUA

In addition to an organisation captured by section 13 of Part 3 of the PDP Act, other parties to an IUA may include contracted service providers, a person or body that is an agency of the Commonwealth or another State or a Territory, or any other person or body (including a private sector body) whether or not located within Victoria.9

Consultation with the Commissioner

Organisations are encouraged to consult with OVIC before preparing and submitting any proposed IUA. This will enable OVIC to consider whether an IUA is necessary, or whether some alternative mechanism or practice could be pursued to avoid breaching an IPP or approved code of practice.

Contact OVIC via email at: policyteam@ovic.vic.gov.au to arrange a meeting and discuss potential options.

It is the responsibility of the organisations to prepare and submit the proposed IUA to the Commissioner. The proposed IUA must contain all the required information under section 45(3) of the PDP Act and should be prepared using OVIC’s IUA template.

The proposed IUA should be sent to policyteam@ovic.vic.gov.au.

If relevant, a proposed IUA should also be accompanied by supporting documentation. This may include a copy of any legal advice received on the matter, a privacy impact assessment and policy documents. The Commissioner may request other supporting materials to accompany the proposed IUA as they see fit.

Consultation on the IUA

Assessment of the IUA

After assessing the proposed IUA, the Commissioner must issue a report.

The report may include the Commissioner’s consideration of the appropriateness of all aspects of the IUA, including the proposed parties to the IUA.

For an IUA to take effect it must be approved by the relevant Minister or Ministers.

An IUA cannot be approved by relevant Ministers unless the Commissioner has first prepared a report on the appropriateness of the IUA and issued a certificate in respect of it.

The Commissioner’s report and certificate must be sent to:

After receiving the Commissioner’s report and certificate, approval may be given:

Where an IUA is approved, it must be published on the Commissioner’s website. However, exceptions to this requirement apply in respect of disclosing personal information and certain information that, if contained in a document, would be exempt under the Freedom of Information Act 1982 (Vic).

What are the reporting requirements?

The Commissioner must also report to any relevant Minister about an IUA on request of the Minister and may report at any other time.18

Can an IUA be amended?

The lead party may apply to the Commissioner for the approval of an amendment to an approved IUA.19

An amendment requires the same approval process as for the original IUA, with any necessary modifications in light of the amendments sought.

Can an IUA be revoked?

The relevant Minister must revoke the approval of an IUA if they become aware of, or following notification from the Commissioner that:

The relevant Minister may also revoke the approval of an IUA on request of the Commissioner or any party to the IUA that is a Victorian organisation.20

Does an IUA expire?

An IUA may include an expiry date, or where one is not specified the proposed IUA must include reasons why an expiry date is not included.21 Noting this, the Commissioner will in most cases request an expiry date to be included in the IUA.

Where an expiry date is included, the IUA ceases to have effect from the date of expiry and can no longer be relied on by the party or parties to the IUA.