As a regulator, the Information Commissioner is responsible for ensuring agencies understand and comply with the Freedom of Information Act 1982 (Vic) (the Act) and the FOI Professional Standards (the Standards).

Background to the Professional Standards

The Professional Standards are a binding legislative instrument developed under section 6U of the Freedom of Information Act 1982 (Vic) (the FOI Act or the Act).

Commencing on 2 December 2019, the Standards apply to and bind all Victorian agencies subject to the Act (agencies). This includes local government, departments, statutory authorities, public hospitals, councils, TAFEs and universities but not Ministers.

The Standards elaborate on obligations under the Act, articulating expectations for FOI practitioners when performing their FOI function.

Why do we have Professional Standards?

The Standards were developed to ensure agencies administer the Act consistently with:

The Standards help to promote best practice in performing FOI functions by prescribing obligations. They give the Act a modern interpretation, both in practice and process.

The Standards aim to:

Overview of the FOI Professional Standards

There are 33 standards, based on 10 themes, relating to the conduct of agencies in performing functions under the Act, and the administration and operation of the Act by agencies.

A complete list of the Standards can be found here: Professional Standards

Who must comply with the Standards?

The principal officer, and any officer or employee of the agency, must comply with the Standards when performing FOI functions: section 6W(1) of the Act.

The principal officer of an agency is also responsible to ensure any officer or employee concerned with the operation of the Act complies with the Standards.

How are Professional Standards engaged, identified and recorded by OVIC?

OVIC’s Public Access Branch assesses each review and complaint it accepts for Professional Standards engagements and when handling a review or complaint matter.

Both potential and actual instances of non-compliance with the Standards are recorded in OVIC’s case management system.

What happens after a Professional Standard engagement is recorded?

After OVIC records a Professional Standard engagement, the next step is to consider if OVIC has enough information to determine whether there has been a breach of the Standards.

In some instances, non-compliance will be apparent based on the information OVIC already has, and further inquiries will not be required to confirm if a breach has occurred.

Where OVIC needs more information about the Professional Standards engagement, OVIC will make preliminary inquiries with the agency and the applicant/complainant. For example, OVIC may ask an agency to provide notification details, such as a copy of email sent or correspondence posted, where the Standard requires an agency to notify an applicant within a specified period of time.

Where non-compliance is established, OVIC will consider the nature and extent of the breach; and determine what action, if any, to take.

Where an agency’s actions are found to be compliant with the Standards, no further action is taken.

How does OVIC deal with non-compliance?

OVIC uses a range of compliance and enforcement ‘tools’ to address non-compliance of the Standards such as:

OVIC’s approach will depend on the nature and seriousness of the conduct, the impact of the non-compliance, and the circumstances of each case.

OVIC adopts a graduated approach to compliance and enforcement. This means that, generally, the more serious the breach, the more interventionist the response.

See the visual process flowchart below for further information.

A minor or technical breach is where an agency’s action or inaction results in a minimal risk of detriment to members of the public or OVIC (such as a minor delay in providing information where an agency must provide it in a specified period of time).

Substantial, persistent or systemic breaches relate to an agency’s action or inaction where there is moderate to high risk of detriment to members of the public or OVIC (such as significant and ongoing delays, repeated and persistent breaches, or the identification of wider systemic concerns).

OVIC most often uses educational and informal tools to try to informally resolve issues. This reflects that most agencies are willing and able to comply with their statutory obligations but may need guidance to help them.

OVIC may engage in any of the following targeted educational and informal activities:

OVIC will generally take educational and informal action to resolve minor or technical instances of non-compliance.

OVIC may take any of the following informal actions to resolve a minor or technical breach:

In the case of a significant, persistent or systemic breach, the matter will be escalated to a senior member of OVIC’s Public Access Branch for consideration of formal action.

Where appropriate, OVIC may subject an agency’s performance and compliance with the Standards to ‘ongoing monitoring’.

Monitoring agency performance allows OVIC to identify and address systemic issues in an agency so that OVIC can measure the extent of an agency’s non-compliance and support them to improve their practices.

When OVIC is dealing with a complaint, OVIC may make recommendations in accordance with section 61L of the Act.

Section 61L provides that the Information Commissioner may make recommendations to an agency, the principal officer or Minister in relation to the complaint.

Recommendations may include suggestions for improvements to the policies, procedures and systems of the agency in relation to compliance with the FOI Act. The Information Commissioner must give the agency, principal officer or Minister, an opportunity to comment on and respond to the draft recommendation.

The Information Commissioner may also determine to refer the matter to another that body for investigation.

Referral for consideration of an own motion investigation

Where appropriate, OVIC may consider whether to conduct an own motion investigation into the breach of the Standard.

OVIC’s Regulatory Action Policy sets out the process of an own motion investigation. 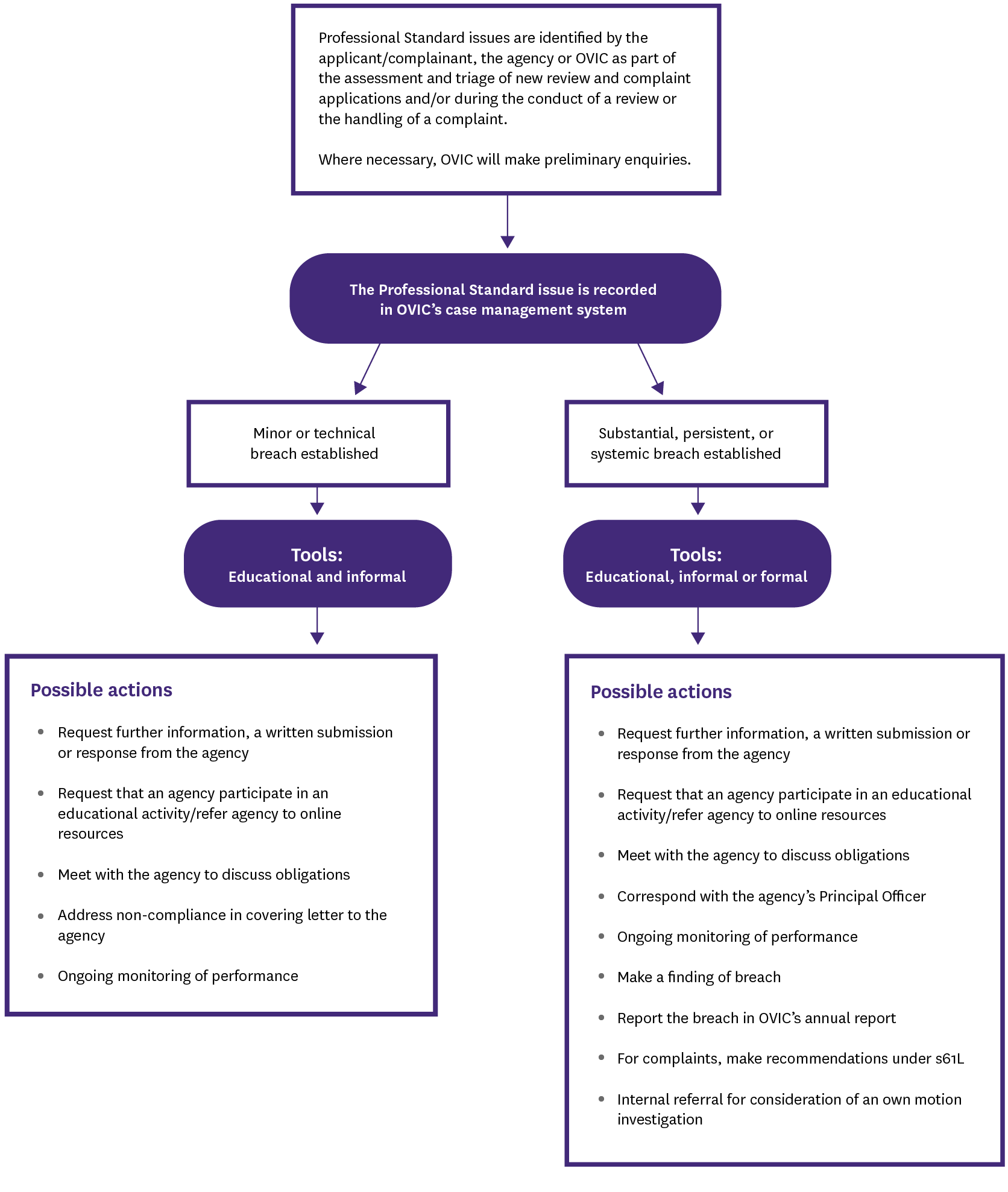 Support and guidance for agencies

OVIC has developed a suite of guidance materials for agencies and members of the public, these are available on our website.

OVIC has published a suite of Practice Notes to assist agencies in facilitating access to information under the FOI Act and the Standards.

OVIC regularly hosts a range of free webinars and events to assist agencies and the public understand their rights and responsibilities in relation to how the public sector collects, uses and discloses information.

OVIC offers free monthly training webinars for agency staff in relation to the Act. The training has been developed to provide agencies with a general understanding of the Act and guide them through how to process a FOI request.

OVIC’s Agency FOI Information Service is an email service designed to provide Principal Officers and FOI practitioners free and tailored advice and guidance about the Act and the Standards.

Agencies seeking information on the administration and operation of the Act and the Standards can email OVIC at AskFOI@ovic.vic.gov.au

OVIC will generally respond within 24 hours from the time OVIC received the email enquiry. However, responses may take between 1 – 5 business days, depending on the complexity of the enquiry.

Read the Guidelines to the Agency FOI Information Service.