Skip to Content
From Monday 12 September 2020, OVIC's website will no longer be supported in Internet Explorer (IE).
We recommend installing Microsoft Edge, Google Chrome, Safari, Firefox, or Opera to visit the site.
Home / About us / News and media / Blog / Privacy from a youth perspective: OVIC’s Youth Advisory Group meets with The Association of Danish Pupils
March 24, 2020

Privacy from a youth perspective: OVIC’s Youth Advisory Group meets with The Association of Danish Pupils 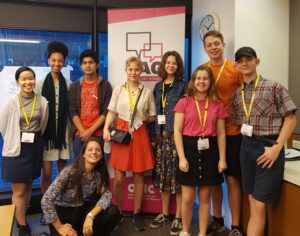 On Monday 17 February 2020, members of the Office of the Victorian Commissioner’s (OVIC) Youth Advisory Group (YAG) met with representatives of The Association of Danish Pupils. We were among some of the lucky young people in our group who were able to meet with the six students from the Danish association and discuss issues regarding youth and privacy.

The Association of Danish Pupils is a nonprofit organisation that is run by students that work with students in schools in Denmark. Their president is only 16 years old and working full time for the organisation in her gap year. The organisation advocates for pupils’ interests in politics and media, with one of their major focuses being on privacy.

At our meeting, we discussed the major issues for our youth today regarding privacy as well as where each of our countries stand with the problem. We discussed what privacy means to us, the privacy issues our youth face today and the ways in which we keep our privacy safe. It was quite insightful hearing the opinions of students of a similar age to us to see how similar our thoughts and issues were despite the geographical difference. See here for a poster collating some of the key responses discussed at the meeting.

One thing that was particularly interesting was the fact that Denmark had a strict law on asking permission before posting a photo of someone online. Although Denmark has laws like this to protect people’s privacy, it was mentioned that many of the youth took advantage of it as it is hard to enforce such a law due to the time and personnel required to do so. It was interesting to see how much the Danish Government and schools supported the publicising of the importance of youth privacy.

Our meeting was an amazing and educating experience, and we thank The Association of Danish Pupils for giving us their valuable time. It’s an experience we will all remember.

A renewed focus on empowering members of the community OVIC’s 2021-22 annual report was tabled in the Victorian Parliament on Tuesday… Continue Reading
September 14, 2022

Access to Information as the pillar of the digital age in the guarantee of human rights, the inclusion of groups in situations of vulnerability and the strengthening of democratic institutions in the 21st century

PUBLIC STATEMENT The members of the International Conference of Information Commissioners meeting on June 22 2022, during the 13th Edition… Continue Reading
Back to top
Back to Top